Show and Tell Tuesday: Show Us Your Pets

Linking up with Andrea for this weeks STT :) This week it is Show Us Your Pets :)

I have never really been a pet-type of person. I grew up on a ranch, and while we obviously had tons of animals, we never really had many pets. Now, that being said...my brother had his turtle, and I had a bunny..they all died. We also each had a few pet lambs, and I had two ponies (not at the same time), and of course, the dogs...my family wasn't (and still isn't) pets-in-the-house people. They love animals...but they belong outside...and that is totally ok..cause that was me...for the longest time. When I was single, I never really thought to get a dog or a cat...it just wasn't in my realm of thinking.

When I met hubby, he had a cat. Hubby actually grew up with cats nearly all of his life. I think he almost always had a cat in his house. I wasn't a cat person. They shed, they went to the bathroom inside and stunk up the house...buuut he had his cat...so, I had to accept him as well :) So, the first pet we had for the first 7 yrs of our marriage was KitKat...who was Siamese. 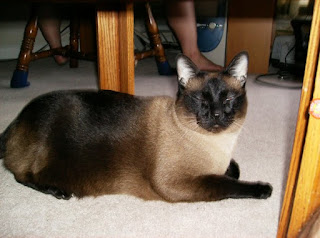 I gotta say...I miss him!! He was certainly a one of a kind kitty! He was was about 14 (?) when he died, and it was so sad to have to let him go. I gotta say, though, that it was nice to have a cat for a couple of years.

K...well, it is now OVER a week since the blog post went live, and about a week since I started this post...soo, it won't go in the blog link up, but I will share it in our comments :)

So....we were cat-less for a couple of years, which was actually quite nice...then, last August, we got a line on a free 5 yr old cat...and we were kind of missing having one...so we took her :) 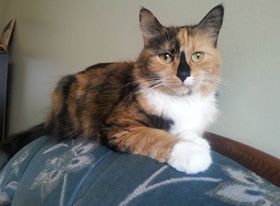 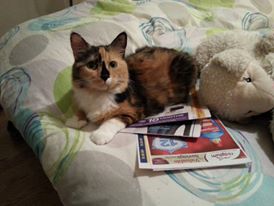 Isn't she cute! She definitely loves Anker more than me, but she will tolerate me..barely! Well, we all lived in peace and harmony until December 28th, when the next door neighbours cat moved herself in. Her name was Sahara. 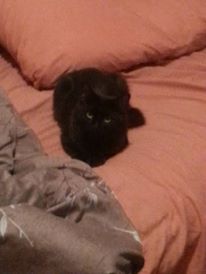 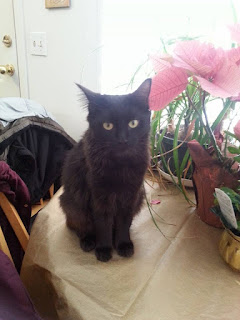 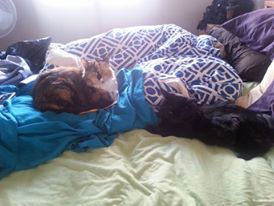 And yes, they even got along :) Kind of.

Then, one day, Sahara got out, and she got her self pregnant....then and her kitties. That was a happy time :) 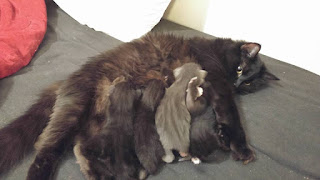 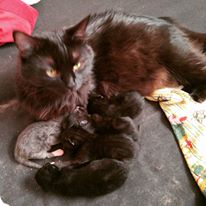 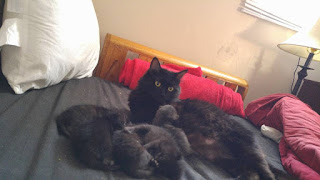 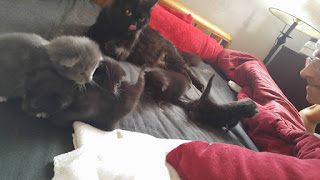 Yes, it was a fun and busy 8 wks with them, that's for sure!!!  When they got walking, then running around, well, that was special :) They were VERY loud at night :) 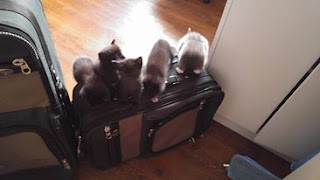 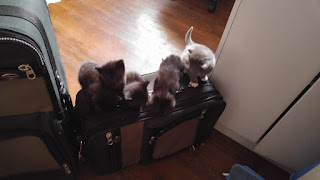 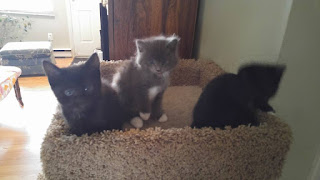 The time came for us to give them away to good homes. We will miss them all, but our house is sure cleaner, less smelly, and quieter for it.

We also had to give up Sahara. *****PLEASE, NO JUDGING!!!***** This wasn't an easy decision, but we just couldn't afford to keep her (getting her spayed, etc), as our finances were (and are) not very good right now. We miss her, but again, our house is quieter, cleaner, and less smelly for it. So, we are back down to one kitty. We might get a kitty next year, or even in the fall if our finances allow for it...but right now, we have one cat, and that is how we like it :)

Oh, and we also used to have a fish, Nemo, that we got from my brother, who got him from our wedding (we had blue beta fish as the centre pieces at our wedding), and he had had him for a year, then he decided that he no longer wanted a fish, and gave him to us. Nemo (and Kit Kat) lived with us for a year (?) before he died on our second (?) anniversary. For the record, I LOVE having fish, and I would actually have them again. Maybe sometime :)

So, that is our pets. Hope you enjoyed reading about them. Oh...and FYI...I am against declawing cats (for the most part). KitKat was declawed, which I did like (less scratching!!), but when Anker got him, KitKat was declawed already. Calico isn't declawed...and we don't plan on doing it. I just think it is too cruel to/for them. Though, I do admit, that it IS nice to not have to worry about the front claws :)
- July 01, 2016

Well, well...Yes, I am still alive :) It has been ANOTHER hot minute since I have posted...I have thought about getting rid of the old blog,... 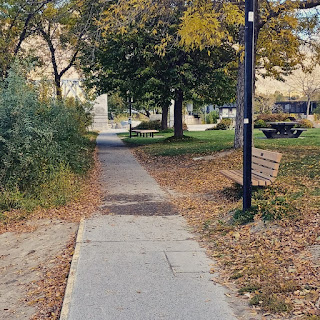 The A Team
Hi! My name is April, and I live in the beautiful Thompson Valley in B.C, Canada. Welcome to my little corner of the Internet, and thank you for visiting our blog! I hope you will grab a cup or glass of something, and stay awhile! I am a Jesus, Starbucks, magazine, summer, Christmas, and family-loving gal. We have been married for 13 years, and have a cat named Calico. I am a Life Skills Worker in the community. My husband is on permanent disability due to a few conditions. Because of medical/health reasons, we are unable to have children. Most of the time, we are at peace with not having the children we desire, but sometimes, we wish that we could experience a little bundle of joy. Here is a little glimpse into our (non-perfect, non-exciting) life as a childless couple. I thought this would be a great platform to bring up the awareness of infertility. We are the 1 in 6 couples in Canada who suffer with infertility. Please feel free to leave a comment and follow me!

Some of my Favourite Blogs